Beef Bread and Brew in Keokuk 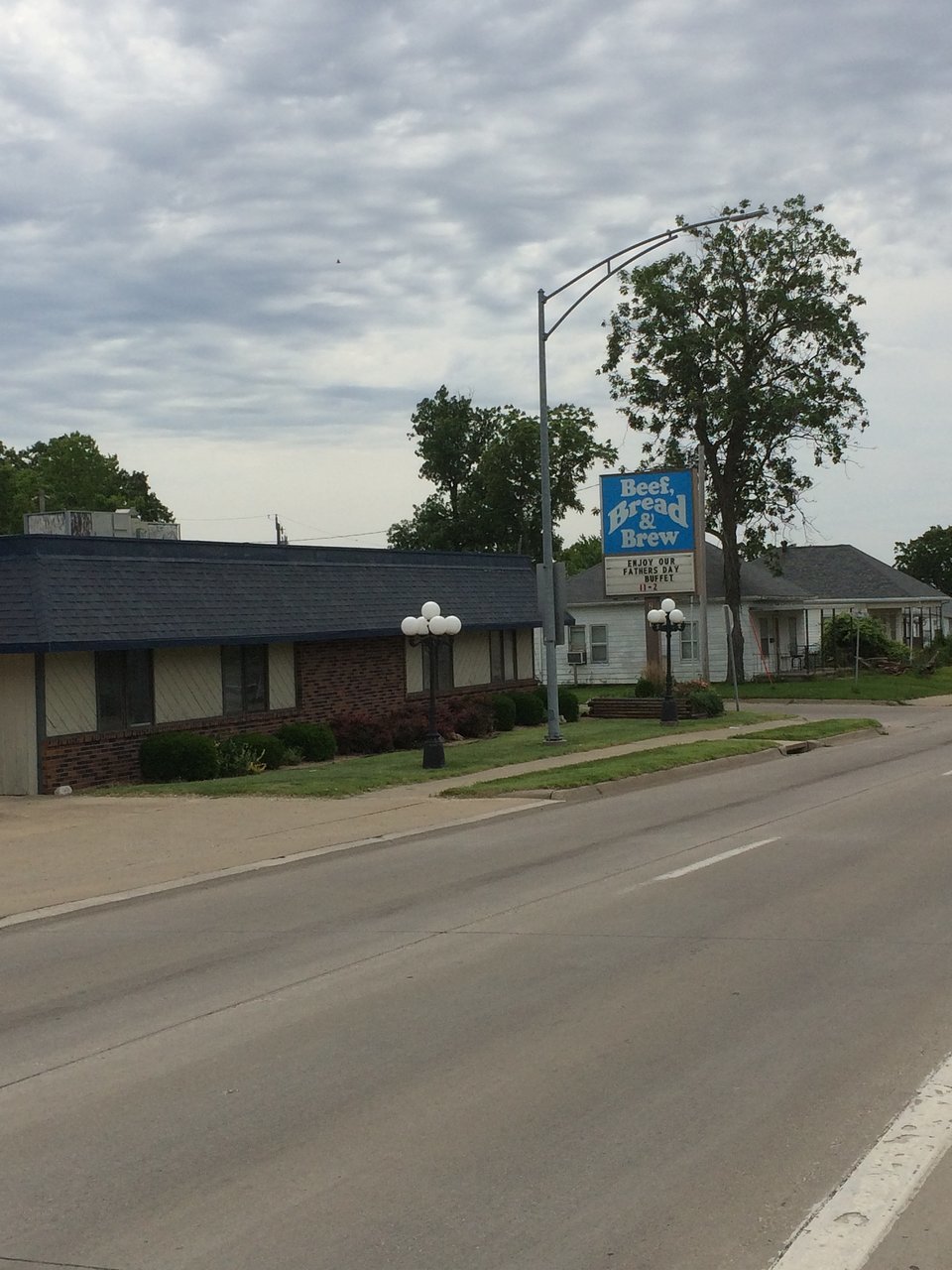 Great place to eat. ....if you want a great tasting steak for dinner or just a sandwich for lunch!!

Saturday night prime rib buffet had good variety of ok food. Prime rib apparently just gets stocked once when the buffet starts, so if you want any pink in your beef, grab it when you get your soup and salad.

The buffet was terrible. We won't be going back. Prime rib was rubber. The only thing edible was the soup.

Best seafood buffet around. Where can you go eat all you want seafood, pound of crab legs, and soup & salad bar for 17.99 NOWHERE but here :)

This is a nicer restaurant. You should have a reservation for bigger parties.

I am in love with this place! The ribs were off the chain! I'm spreading the word! Worth the money!

Service was excellent! Soup & salad bar was really really good. I had the filet and crab claws combo...was ok...I would give it 3-1/2 stars but don't know how you give a 1/2 star. Steak was tender but not much flavor crab claws were blah...over cooked no seasoning. Place is very clean, very nostalgic. Wish there were more places like this, a step back in time that I enjoyed very much, including the music in the backgound.

This place is great! Great food and great service 👍

Went there for a Rehearsal dinner and it was not good at all! Barely anyone ate their meal, and people were taking it home to feed their dogs... That place use to be good...

Amazing food, best Ribeyes I have ever had! The Prime Rib buffet is amazing! Oh and the smoked brisket on the prime rib buffet is mouth watering! Great staff they made us feel right at home

Salad bar was good, soup, not so much. Good service.

For a good dinner for mother's day, this is the place to go for a great tasting ham, veggies, strawberry cheesecake takeout. Let's all support our local fine dining places in this covid time.

We had mothers day buffet here. The service for a group of 5 people was anazing just wish the food was as good.Alot of our food was cold and buffet pans were empty more than full. Our family spent a fair amount. Food quality was poor for the price we gave. COFFFEE WAS SERVED COLD. I do want to say our server Amy was amazing it wasnt her fault that the kitchen staff were under performing. We actually made reservations for this meal. I would hope management takes note of this and provides a basic food temp class for its employees. Overall the reason i am scoring this a 2 is because your table service was very good!

Stopped for the sesfood buffet. Good food and a nice atmosphere.

Nothing like finding local restaurants to fill you up with great food. A must stop.

Had the cajun pasta with chicken and shrimp. It was good, I expected a bit more heat and you only get 3 shrimp...Which is why they get 4 stars instead of 5 I will probably order this dish agaon.

Some unexpected goodies you don't usually find on a buffet. Excellent food and service.

Great food and service. We had the ribeye steak and potato skins that were 5 star !

Awesome eats!!! The waitresses are great & you WON'T leave hungry!! Wonderful salsd bar too. Thanks Marlene!!

Salad bar is good, food is very average, atmosphere is like stepping into your grandma’s back in the 70’s.

My husband and I had a wonderful meal here on our weekend get away in Keokuk. We had soup/salad bar with the salmon; he really enjoyed the clam chowder! The service was outstanding. Thank you so much for helping us enjoy our weekend!

Came here for Mother's day buffet and Food was hot and fresh. The only complaint was that My grandpa had ordered coffee and they brought him an ICE cold cup but they were quick to fix it. Food was good and The price wasn't unreasonable for what we got! Will be returning!

Awesome meal and service. The salad bar was outstanding, the soups delicious and the cheese spread sooo addictive. 10 of us with a variety of meals and everyone was very happy!

Excellent service and staff definitely recommend getting a drink there awesome atmosphere!

Very great friendly service oir waitress was awesome and the food was great!!!!

I went with my husband and two sons for supper. I have no complaints and even had left overs to eat later.

I wanted to throw-up after eating here. I had the $21 seafood buffet on Friday night. The staff was very nice. the salad bar was OK. However the main course was awful. The fish was barely warm, greasy, and under-seasoned. I tried the ribs and they were cold. I asked the server to warm them up and she did, however they were a bit warm but had seen better days. The mashed potatoes had very little taste. The popcorn shrimp were cooked to death (dry and crispy), and the peel and eat shrimp were bland. The fish chowder in a mini bread bowl was disgusting! The cold rolls and packaged wheat soup crackers were the highlight of the $21 buffet. This was one of the worst meals I have ever had!

Friendly staff but food not good. I had the chicken cordon blue and was not happy with it. Entre came with salad bar and soup. Salad bar is ok soup was not good.

Was disappointed in the buffet. Prime rib was over cooked and there was very little selection overall for a buffet. Price was ok for prime rib buffet but would have loved to have Au jus available or choice of how I wanted my prime rib. Overall it was only an ok meal. Would probably come back again and try again.

Food was good. Had the crab legs.would like to try their prime rib some time. Will be back

Your question has been sent.

Your review has been submitted.

Want to order over the phone?

Thank you for being with us!

We will call you back!